Dr. Balkhy received his Cardiothoracic and Vascular surgery training at Tufts New England Medical Center and the Lahey Clinic in Boston, MA. He was Chairman of Cardiac Surgery at the Wisconsin Heart Hospital in Milwaukee, WI prior to moving to the University of Chicago in July 2013.
Dr. Balkhy has been well known for his strong advocacy of less invasive cardiac surgery. He was one of the first surgeons in the country to apply minimally invasive techniques for Atrial Fibrillation surgery using a Thoracoscopic approach. As a leader in off pump coronary bypass surgery (OPCAB), he has participated in several multicenter randomized studies including as a principle investigator in the FDA mandated EPIC PAS-Port proximal anastomotic device clinical trial. In addition, he has the largest experience in the world with clinically approved distal coronary anastomotic connectors and was the national PI for the MAGIC trial of patency outcomes of the C Port distal anastomotic device.
Since adapting robotic surgery into his practice in 2007, Dr. Balkhy quickly became a leader in beating heart totally endoscopic single and multi-vessel, robotic coronary bypass and has one of the largest series of these procedures in the world. He pioneered the robotic connector coronary bypass procedure (Connector TECAB) and lectures widely on this topic and proctors surgeons all over the world.
Since joining the University of Chicago in 2013, Dr. Balkhy has developed a busy multifaceted robotic cardiac surgical program, applying the da Vinci robot to perform a variety of procedures including totally endoscopic multivessel coronary grafting, complex intracardiac valve procedures and arrhythmia surgery. He has emerged as one of the very few surgeons in the world with a near purely robotic cardiac surgery practice.
Dr. Balkhy has published numerous peer-reviewed articles as well as several textbook chapters on robotic cardiac surgery. He is a frequent invited speaker and presents at national and international professional conferences and scientific meetings. He has trained and proctored numerous surgeons on robotic techniques in cardiac surgery both in the US and internationally and is a strong advocate in helping to increase the adoption of cardiac robotic surgery worldwide. 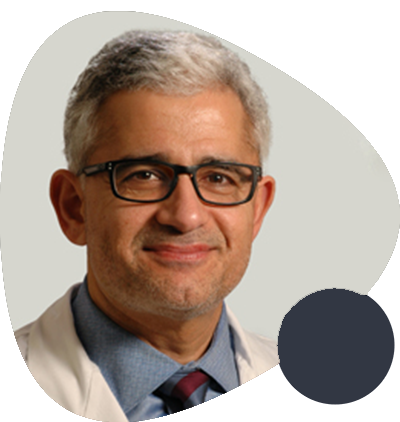